Cuba was like a country locked in time, it was so unlike anywhere I had been that it was a first hard to relate to or understand how things worked. From the supermarkets with bare shelves, the chaotic public transport and confusing currency exchange it was an adventure to be sure.

But after my time there I felt like I had gone through my trial by fire, I had my moments with awkward hand language and terrible Spanish trying to get a room for the night. The time I got lost in Habana in the back seat of an American classic Dodge with five other Cubans in their version of a collectivo. Ordering street food that arrived by basket from the second floor. Being invited to stay with a wizened old lady on an island outside Habana, proudly being shown yellowed photographs, mementos of a bygone era…

It all became second nature, and when I flagged down a random private car and jumped in the back seat after negotiating a price to the city centre I realised I really had figured this country out. The man behind the wheel was working two jobs and trying to support his young family, he was more than happy for a few extra dollars to drive a stranger. He showed me pictures of his baby boy and I ended up giving him double the money we had agreed on because everyone is struggling, everyone is looking for a job and yet everyone is hopeful.

Welcome to Cuba, it really is the wild west out there! 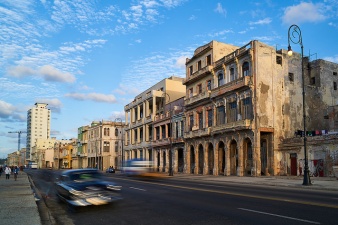 Rundown of costs and complications of visiting Cuba