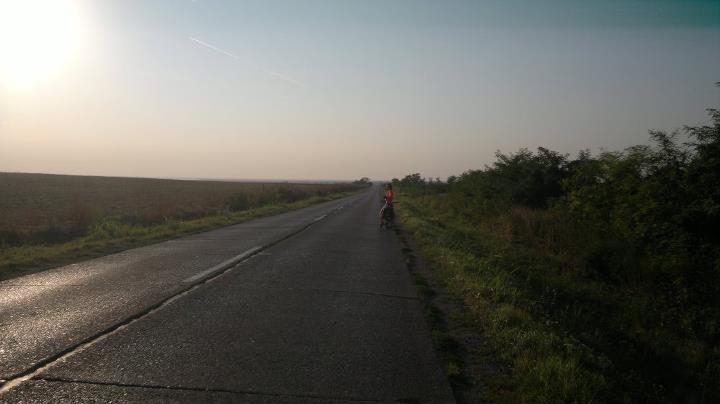 The first day we had some steep hills leaving Novi Sad, but we had left very early in the morning so we tackled them without the heat of the day. We saw the most amazing sunrise and felt really good about starting our trip. After the  hills we had the most amazing downhill entering a empty plain as far as we could see and not a car in sight. As it turns out the road was closed for renovation which was perfect for us. One of the screws on Ninas back frame fell off after some very bad bumps but almost immediately Vladimer an ex special forces man in a service van patrolling the road stopped and tried to help us although it turned out he did not have the right size screw. But he gave us some strips to secure the frame until the next town 10 km down the road. 5 min after we arrive in the town Vladimer pulls up with a bag of screws he has bought for us and spent the next 30 minutes fixing and checking the bike an absolute angel!

So we were back on the road and after a quick pit stop for pleskavicia we entered Belgrade at 14:00. The road into Belgrade was a bit scary with big trucks and terrible directions that sent us around the town at least three times! Nobody in Belgrade seemed to have the slightest clue where anything was,and everyone we asked would involve a whole crowd of people who each had their own opinion. The best was when Anna asked a police man who promptly started flagging down taxis none of which were any help.

But in the end we made it to the address at 16:00 only to find out that our host would not be able to make it til 20:00. Dead tired we crashed out in a park looking like total bums strewn out on the grass, but after a nap and some food we headed back to the apartment.

This is where things got really interesting the apartment was TINY and there were 5 other couchsurfers there besides the 2 original inhabitants. Anna got greeted by a camera in her face as a team from Ireland were making a show on Couchsurfing for an Irish television channel and it was absolute mayhem! Total mess and literally a corner to sleep in, we excused ourselves early and went to bed only to get woken up a hour later by someone blowing up an air mattress in the room sounding like a jet engine. 6 people slept in a room the size of a shoebox and downstairs it was worse. We snuck out at 5 and didn’t look back.

By the way l found us in the documentary.